As a participant at MEUS you can take up one of the following five roles: Member of the European Parliament (MEP), Minister of the Council, Interpreter, Journalist or Interest Representative. As a MEP and as a Minister you will debate and propose amendments on the simulation's two real-life legislative proposals from the European Commission and as an Interpreter you will interpret everything that is being said during the sessions. As a Journalist you will play a vital role in disseminating information regarding the sessions and the topics discussed. As an Interest Representative you will try to influence the legislators with your own devised strategy to push your agenda. Participating in MEUS in any of the five roles will not only help you gain a better understanding of the decision-making process of the European Union, but will also challenge you in multiple ways and assist you in developing multiple different skills, such as public speaking, working as a team under pressure and increasing your negotiation skills!

Political groups in the Parliament will be led by elected Presidents, who are responsible for coordinating discussions in Parliament and outlining political groups' positions on the proposals debated. Effective communication and strategy are crucial in successfully adopting legislation on a European level and both will be necessary at our conference, particularly when it concerns dialogue between the European Parliament and the Council, where finding common ground on the legislative proposals will be necessary for participants to reach their goals. To foster cooperation between the Institutions, formal trilogue meetings between representatives of the Parliament, the Council, and the Commission will be held periodically and will have the primary goal of facilitating discussion across Institutions and seeking common ground on the legislative proposals.

Does all that sound complicated? No need to worry! Participants will be supported by members of the Organising Team throughout the simulation and in the run up to the conference. Moreover, experienced Chairs will moderate debates during the simulation and will maintain order whilst ensuring that all participants have equal opportunities to make their voices heard and contribute to discussions. The presence of Commissioners in our simulation will assist participants in understanding the European Commission's intent behind the specific legislative proposals discussed and will highlight the pivotal role the Institution plays in the Ordinary Legislative Procedure (OLP). Commissioners will will present the legislative proposals in both Institutions and be responsible for conducting the trilogue meetings, ensuring that all participants fully understand the spirit and the technicalities of the proposals discussed. The Legal Service - consisting of members of the Content Team - will check the legality of the amendments proposed by participants and ensure that they abide by EU law and stay within the scope of the conference's proposals. There will also be Political Advisors present at our conference, whose role is to act as a first point of contact for participants, providing support pre-conference and assisting in the drafting of amendments and the development of a coherent strategy throughout the conference.

Although every role has its own unique, specific tasks, everyone must ultimately work and collaborate with each other to bring MEUS to life and create the most realistic simulation of European Union decision-making that there is!

With the fallout of the COVID-19 pandemic yielding great consequences for the economic prosperity and social cohesion of Europe, the Just Transition Fund will put participants at the heart of deciding the priorities of the European Union as it seeks to balance social justice with climate action as part of European recovery package. Moreover, with our world becoming more interconnected and digitalised than ever, it is vital that Europeans feel secure, safe and comfortable online and that terrorist content is not allowed to spread and endanger citizens. With these two topics at the heart of MEUS 2021, participants are in for hours of tricky debates surrounding two contentious proposals that is bound to create controversy!

ADDITIONAL ROLES AT THE CONFERENCE

For the sake of making our simulation realistic within the one-week time span, we implement a simplified version of the OLP. During the first two readings, taking place over two days, both institutions will separately debate the legislative proposals. Before the voting period during which the proposals are accepted or rejected, MEPs in the Parliament and Ministers in the Council undergo the first reading of the proposals and propose amendments to the text which will then be discussed among all the members of their respective institutions. Proposed amendments will be accepted by a simple majority in the Parliament and a qualified majority in the Council and are then integrated into the legislative text which will go to the other institution for a second reading. The other institution will then discuss the legislative proposal comprising the passed amendments.

During the second reading, the institutions will propose, debate and vote upon their own amendments in turn. During the third and final reading, the ultimate version of the legislative texts, as amended by both institutions, will be discussed. After the debate on the final version of the text, both institutions will vote to either accept or reject the complete legislative proposal. If the proposal is accepted, it shall then be a secondary legislative act of the European Union and become binding for all Member States from thereon. 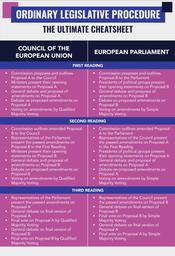 Unless you participate as a Chair, News Editor/Video Journalist, Lobbyist or Interpreter, you are not allowed to bring a laptop or tablet to the European Parliament. There is also no Wifi connection available.

We encourage you to prepare well and have the directive,regulation and provided guides printed out to work with at the conference.